Donald Trump’s historic second impeachment trial begins on Tuesday, with prosecutors arguing that he must be convicted of the “most grievous constitutional crime” after an armed crowd stormed the Capitol building.

Lawyers for the former president insist he is not guilty of inciting mob violence in January in a bid to overturn the election, describing it as “political theatre”.

Mr Trump faces a sole charge of incitement to insurrection after he encouraged a rally crowd to “fight like hell” for his presidency.

Key arguments to be used by Trump’s legal team

Donald Trump’s lawyers released a 78-page memorandum on Monday detailing a range of legal and factual arguments that they intend to make at trial.

Here, AP has picked out the main arguments his legal team will make.

TRUMP DID NOT INCITE THE INSURRECTION

Defense lawyers are adamant that Mr Trump did not incite the riot when he addressed a huge crowd of supporters at a rally that preceded it.  They accuse House impeachment managers of cherry-picking Mr Trump’s statements from an hourlong speech by highlighting only those that Democrats see as helpful to their case, pointing out repeatedly that he had told his supporters to “peacefully and patriotically make your voices heard”.

The Trump legal team plans to lean on the Constitution in multiple ways, including by arguing that Mr Trump enjoyed First Amendment protections in everything he said to his supporters.  “The fatal flaw of the House’s arguments is that it seeks to mete out governmental punishment — impeachment — based on political speech that falls squarely within broad protections of the First Amendment,” the lawyers say.

THE TRIAL ITSELF IS UNCONSTITUTIONAL

This is disputed among legal scholars, but Mr Trump’s legal team plans to argue that the trial itself is unconstitutional because he is no longer in office. They say the Constitution does not extend the power of impeachment against a “private citizen.”

DEMOCRATS HAVE THEIR OWN STATEMENTS AND ACTIONS TO ANSWER FOR

Mr Trump’s lawyers signaled that they’ll look to defend him by invoking other examples of what they say is similar political rhetoric from Democrats.  They point to a statement that House Speaker Nancy Pelosi made at a 2018 news conference about the Trump administration’s zero tolerance policy on immigration. “I just don’t even know why there aren’t uprisings all over the country. Maybe there will be,” she said.

White House press secretary Jen Psaki has said Joe Biden will be occupied with the business of the presidency and would not spend much time watching the televised proceedings.

“He’ll leave it to his former colleagues in the Senate,” she said.

Mr Biden gave an interview on Sunday with CBS when he said he would leave the impeachment process to others.

“Look, I ran like hell to defeat [Donald Trump] because I thought he was unfit to be president,” he said.

“I’ve watched what everybody else watched, what happened when that – that crew invaded the United States Congress.

“But, I’m not in the Senate now. I’ll let the Senate make that decision.”

The Justice Department will ask US attorneys who were appointed by Donald Trump to resign from their posts, as the Biden administration moves to transition to its own nominees, a senior Justice Department official said.  But the US attorney overseeing the federal tax probe involving Joe Biden’s son, Hunter Biden, will remain in place.

The acting attorney general, Monty Wilkinson, called US Attorney David Weiss, who runs the federal prosecutor’s office in Delaware, and asked him to remain on the job, the official said.

The transition process, which happens routinely between administrations, is expected to take weeks and would apply to a few dozen US attorneys who were appointed by Mr Trump and confirmed by the Senate.

Many of the federal prosecutors who were nominated by Mr Trump have already left their positions, some in recent weeks.

The Screen Actors Guild has passed a resolution effectively banning Trump from rejoining them ever again.

The resolution was passed by SAG-AFTRA’s national board on Saturday, which held that the “well-documented actions by Donald J Trump to undermine the peaceful transition of power in the US, and to undermine the delivery of truthful information to the public by attacking journalists is anathema to the values” embodied by them and their members.

Gabrielle Carteris, the guild’s president, said: “Preventing Donald Trump from ever rejoining SAG-AFTRA is more than a symbolic step. It is a resounding statement that threatening or inciting harm against fellow members will not be tolerated. An attack against one is an attack against all.”

The resolution talked about disciplinary charges against the former president, alleging that he incited insurrection against the US government on 6 January.

The guild was scheduled to hold a hearing on 5 February on the charges against Mr Trump, but on 4 February the former president preempted its decision by resigned his membership in a letter stating “Who cares!”

The Justice Department under the Biden administration has dropped a lawsuit against Stephanie Winston Wolkoff, a former adviser to Melania Trump, who was accused of breaking a non-disclosure agreement with her tell-all book about the first lady.

The case against Ms Wolkoff, the author of “Melania and Me”, was dismissed on Monday by a federal judge, reported Bloomberg News.

Ms Wolkoff, who worked as an unpaid adviser to Ms Trump from January 2017 to February 2018, was accused of violating an agreement that she had signed in 2017.

While she claims that all the terms of her agreement were fulfilled and the provisions regarding confidentiality ended once her contract was terminated, the Justice Department had stated at the time of the lawsuit that she never shared the draft of her book with Melania Trump, her chief of staff, or the Office of the White House Counsel.

Biden administration to seek resignation of Trump-appointed US attorneys

At least 56 US attorneys appointed during Donald Trump’s presidency may soon need to vacate their posts as the Justice Department under the new Biden administration plans to seek their resignation.

While the process could take several weeks, calls for the resignations may start from as early as Tuesday as the department looks to ensure a smooth transition, a senior official told CNN.

The Biden administration is reportedly planning to ask at least two to continue with their work: Delaware US Attorney David Weiss, who is investigating the president’s son Hunter Biden, and special counsel John Durham, who is looking into the origins of the Trump-Russia probe – although he is expected to resign as US Attorney in Connecticut.

At present, of the 94 US attorneys, at least 25 are operating in an acting capacity due to the resignations of several Trump administration-appointed attorneys. The acting attorney for Washington DC, Michael Sherwin, who is looking into the 6 January riots, may also continue his investigations.

The Harvard law professor was part of the former president’s legal team during his first impeachment but is not taking part during the historic second trial.

Mr Dershowitz was a guest on Sean Hannity’s Fox News show on the eve of the Senate trial.

The US Capitol rioter, whose real name is Jacob Chansley, is receiving organic food while he awaits trial for his role in the 6 January violence after a federal judge ruled in his favour.

“The fact that this man is given this kind of preference shows the double standard in the criminal justice system, and in the detention system,” said civil rights activist Reverend Al Sharpton.

The advert uses footage of the 6 January attack on the Capitol and historic Ku Klux Klan rallies to pressure senators to convict the ex-president at his trial.

The ad comes as the senate prepares for a historic second trial of Mr Trump for inciting the violence on Tuesday.

BLM activists blame Mr Trump for inciting his supporters to attack the Capitol and for emboldening white supremacists with his rhetoric and actions.

David Schoen wrote to Senate leaders telling them he no longer required them to pause the trial so he could observe Shabbat on Friday evening and Saturday.

Mr Schoen said in a letter that he would not participate on the Sabbath but that his role would be covered by Mr Trump’s defence team and the trial should carry on without him. 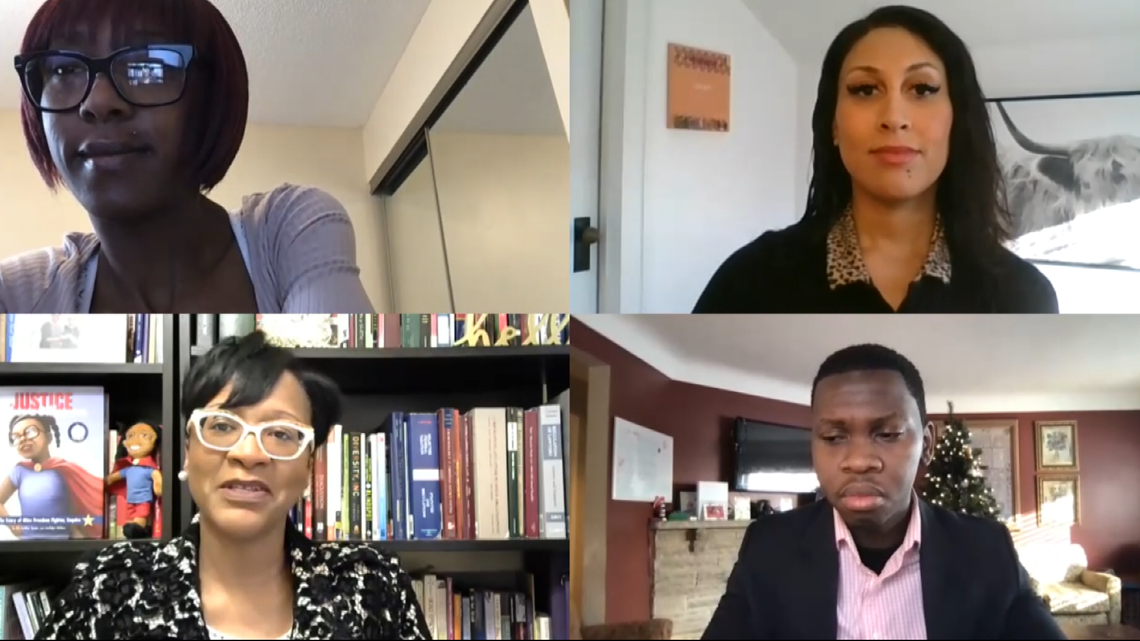